Clifford Wade, whose family came west on the Oregon Trail, had a saddle, made by an unknown maker, that his dad brought with him from the east. Tom Dorrance, who lived in Wallowa County, Oregon, cowboyed with Clifford and admired Cliffords livestock handling ability and the saddle Clifford rode that he had inherited from his dad.

According to Dale Harwood, noted Idaho saddle maker, in 1939, Tom Dorrance took Cliffords saddle to Hamley & Company Saddle Shop in Pendleton, Oregon. He had a new saddle made on a saddle tree copied from the tree in Cliffords old saddle.

In 1940, Tom Dorrance was not satisfied with the fit of this saddle. He went back to Hamleys and worked with Walt Youngman, head tree maker at Hamleys, and they made some modifications in the saddle tree.  At that time, Hamleys made both saddle trees and saddles at their shop. Dorrance continued riding this improved saddle throughout his long career as the premier horse psychologist. 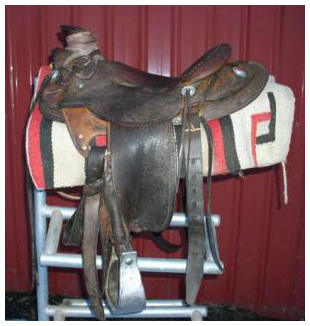 Hamleys made more of these trees that Tom Dorrance and Walt Youngman had designed. They wanted to call them Dorrance trees, but Tom wanted the tree named after Clifford Wade from whom they had copied the original. Hamley & Company made a few saddles on the Wade trees. They were mostly scattered around northern Nevada, eastern Oregon, and southern Idaho, but had limited popularity.

In 1961, Dale Harwood opened a saddle shop in southern Idaho. Harwood had buckarooed on ranches all over northern Nevada and Oregon. He started making saddles for working buckaroos. In 1962, Ray Hunt had Dale Harwood build him a saddle on a Wade tree. Harwood credits Ray Hunt with popularizing the Wade style of saddle by riding one in the many horse clinics Hunt conducted throughout the United States, Canada, and also Australia.

There are several reasons why Wade saddles remain popular today. The saddle sets low on a horse, giving a horse better leverage while holding heavy livestock that has been roped. The horn is low and out of the way when roping. The horn has a prominent lip to make dallying with your rope easier. Working buckaroos really like the saddle because of the way it fits a horse, never moving whether riding in steep mountains, or on the flats.

Tom Dorrance's original saddle,  built on the first Wade tree, which he wore out and recovered himself, is currently owned by Jim and Luke Neubert, sons of Bryan Neubert, horse clinician from Alturas, California. The saddle was given to Bryan's sons as a gift by Tom Dorrance in 1989. Tom Dorrance's saddle copied by Hamley & Company from Clifford Wade's saddle and then reworked by Dorrance and Walt Youngman.

(Article by Mike Laughlin, courtesy of Cowboy Showcase.  A version of which appeared in the July 2004 issue of Western Horseman Magazine. The photo is Tom Dorrances's original Wade saddle and is courtesy of Brian Neubert)

The introduction of the Wade into Australia would have to be credited to Ray Hunt.  His influence on horsemen & horsewomen since first conducting clinics in Australia has been profound.  He always rode a nice Dale Harwood saddle which not only impressed the clinic participants but also some saddle makers.  Michael Bethel was one of those saddle makers who traveled to the USA to learn the finer points of saddle making from the likes of Dale Harwood, who, in 1992 spent some time in Australia helping saddle & saddle tree makers hone their skills.

The Wade is one of the most popular western cowboy or buckaroo saddles being made today and  there is more demand for the Wade  than any of the other western saddles being made at BETHEL SADDLERY. Utilising the expertise of treemaker, Warren Wright Horseman & Horsewoman throughout Australia are seeing the benefits of using one of these saddles. For more information & photos go to the WADE SADDLES page or Contact BETHEL SADDLERY anytime.

Bethel Saddlery on Facebook
About Us
Bethel Saddlery Online
This email address is being protected from spambots. You need JavaScript enabled to view it.